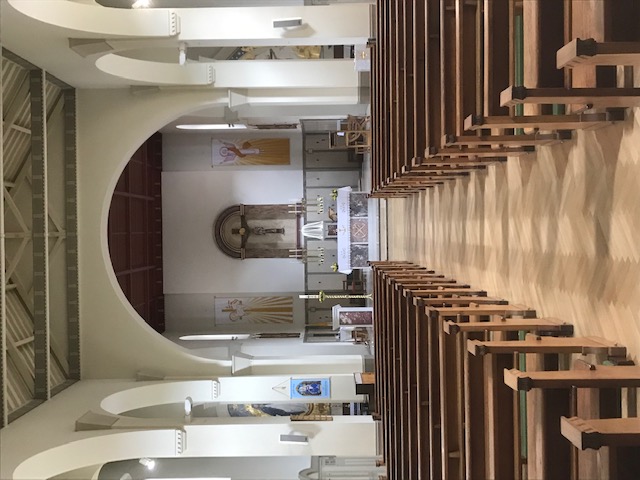 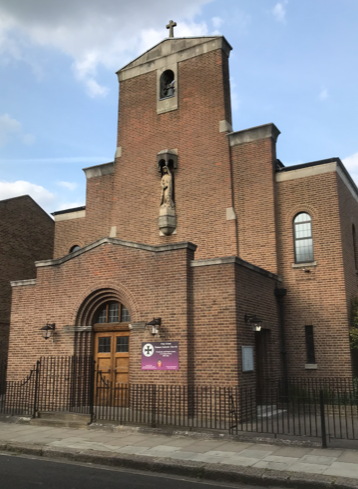 Catholic life came comparatively late to Fulham and it was only in 1842 that a mass centre and school for girls and infants was established in Parsons Green Lane.

Between 1848 and 1884, when Parsons Green was a district of market gardens and a few scattered houses, Mass was said occasionally for the colony of poor Irish workers in a room of a house at the Bottom of Crown Street – opposite to where Parsons Green tube station is now situated.  This little mission was served from Brook Green, Hammersmith, and the church of St Thomas of Canterbury did all the parish work.

In June 1884, a school chapel in Cassingley Road (now known as Ashington Road), which still stands today,  was formally opened by Cardinal Manning, who also celebrated Mass in the chapel.  The school occupied the upper floor and the chapel the ground floor.  In 1887, the use of the school as a chapel had to be abandoned due to the ever-increasing number of children.  A temporary iron church was built close by.

The present church of the Holy Cross was not built until 1924, to replace the temporary one.  It was paid for by Mr Edward Eyre.  The foundation stone was laid on 19 January 1924 by Bishop But and the church was formally opened on 21 December of the same year by Cardinal Bourne.  In the Altar of Our Lady were mosaics in memory of those who had died in the Great War.  A west extension was constructed in 1956. 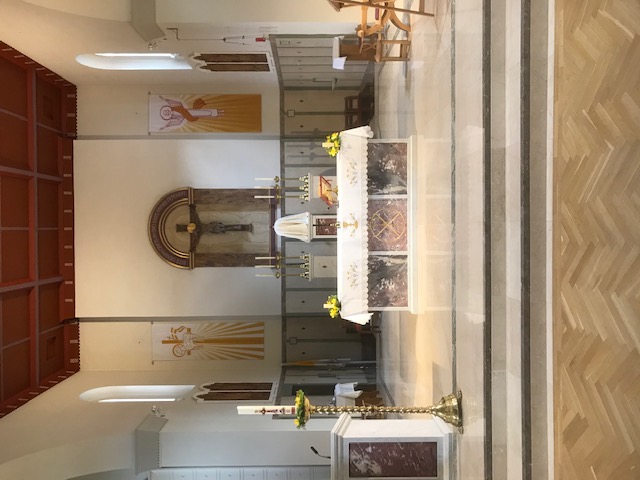 During World War II, some thousand homes were destroyed in the bombing and 30,000 damaged.  On 9 September 1940, late in the evening, the air raid sirens sounded and, at 3 am, with AA guns opening up a barrage of fire, the first bombs began to fall on Fulham.  Just up the road from the church, at the junction of Munster and St Dionis Roads, ten local ARP rescue workers died when a delayed action bomb exploded as they were trying to rescue families.  Even closer o the church, Cristowe and Alderville Road were hit.  This went on night after night and, at the end of the war, some thousand homes in Fulham had been destroyed in this bombing and another 30,000 damaged.  The church, however, was not hit.

The marble was carried on the shoulders of the dockers, many of whom were Holy Cross parishioners, in procession to the church and installed.

After the war, some of the parishioners who had left to fight came home to the parish, tired of war, but grateful to be alive.  They came home to a country that was bankrupt, with little food and enforced rationing, but still they had great hope for the future.  The parish decided it would be fitting to re-design the sanctuary area with a new altar to reflect this new hope and to remember the dead of the war.  It was their gift to God.  They had no money, so they had to save for many years.  The marble came from Carrara in Italy, the finest in the world, and was shipped to the London docks, then transported by barge to Carrara Wharf by Putney Bridge Tube station.  Once unloaded, it as carried on the shoulders of the dockers, many of whom were Holy Cross parishioners, in procession to the church and installed.  That was the last shipment to enter Carrara Wharf before it closed.

The parish has changed considerably over the years and continues to do so, as members come and go. Holy Cross has a lovely mixture of peoples of varying nationalities and cultures. It doesn’t matter whether you are just visiting, or are staying in the parish for some time, we are delighted to have you with us and your presence is very much appreciated. 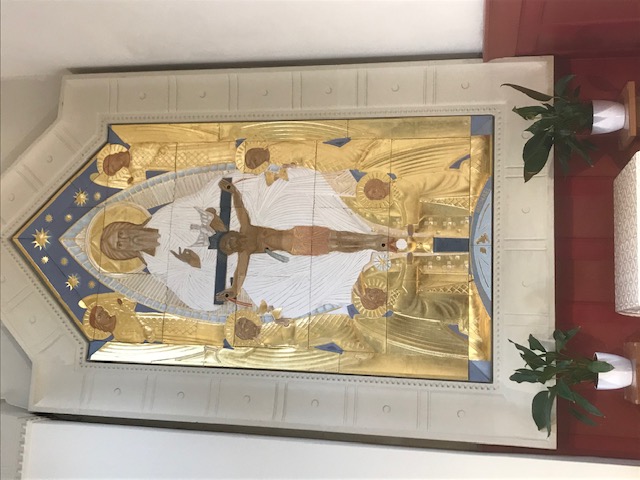 In 1914 a local lady lost her son in action in the First World War. She bought the local rubbish tip and on it in 1922 built the church of Our Lady in his memory. She presented a silver cup to the first baby baptised here and a suite of furniture to the first couple married. Since that time it has been the parish church for this part of Fulham.

Our Lady’s church was designed by a Catholic Priest Fr Benedict Williamson.

It is a masterpiece of light and space. Its soaring classical columns and Romanesque arches give it a height and grandeur that make it look deceptively large.

The Egyptian details reflect the fascination of the time with all things Egyptian after the discovery of Tutankhamen’s tomb. The Stations of the Cross are magnificent. Each is a meditation in its own right.

Click here for more information about Our Lady of Perpetual Help Sands End.